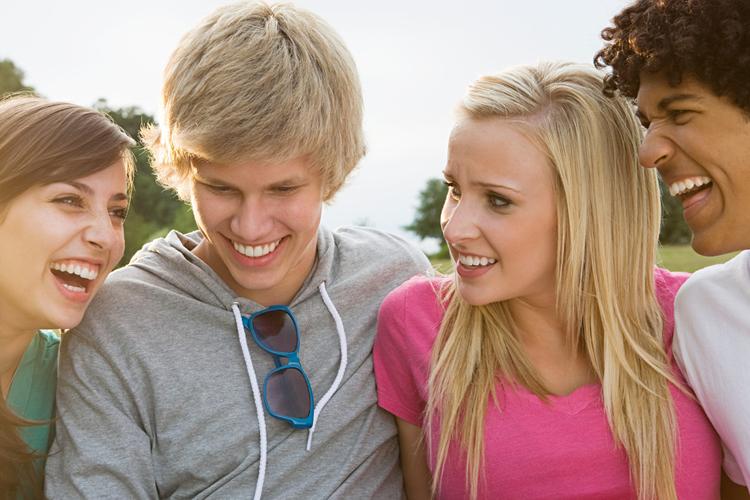 If you are a parent of a teen, perhaps you can relate to some of these comments: “Not my kid.” “He’s an athlete, so he doesn’t do drugs.” “Oh, she knows better.” “We’ve talked with her about the dangers (of drugs), so I’m not worried.” “He really wants to succeed, go to a good college. He’s too motivated to drink or smoke.” “She wouldn’t throw her life away like that.” “Our kids aren’t left alone; we’re not parents who check out, you know? We’d know if something was going on.”

As a parent, we all want to think our children will be able to stay strong throughout their high school years and not start abusing drugs and alcohol. The reality is that high school is tough. Kids are trying to fit in, find their way and hopefully get their first boyfriend or girlfriend. Pressure is intense. Even the best parenting can’t necessarily thwart alcohol and drug experimentation among kids, experts say.

It’s especially hard when teens observe a few academically or athletically successful or popular kids “doing it”—whatever “it” is—within their social circles. When a teen sees another kid smoke or drink on weekends and then still manage to keep up fairly good grades or excel in their sport of choice, other teens begin to form a misconception that there is no harm in doing the same. Many others just get tempted or pressured to join in, to fit in. So that may mean smoking marijuana and drinking alcohol as early as 13 years old.

But for some, the “it” may be trying cocaine or even harder substances. What addiction experts want parents to understand is even if your child says he “only smokes marijuana occasionally,” or has only “tried beer,” don’t adopt an accepting view of their experimentation. Most likely they are doing more than what they admit to, and alcohol and marijuana at a young age is highly addictive and harmful to a teen’s developing brain.

NOT YOUR FATHER’S MARIJUANA

“First off, marijuana is a dangerous drug that is nearly 80% stronger today than 50 years ago. Teens risk a lot by using it, as the human brain isn’t fully developed until the age of 25. We see people with major problems,” explains Morris Gelbart, PhD, executive director and founder of the Thelma McMillen Center for Alcohol and Drug Treatment at Torrance Memorial Medical Center.

Kids aren’t sharing one joint on a rooftop like in the 1970s. They often buy “dabs”—highly concentrated doses of cannabis made by extracting THC (and other cannabinoids), using a solvent like butane or carbon dioxide, to create sticky oils that look like wax. This process is dangerous (done poorly by amateurs, it can even result in home explosions). Experts lament that kids ingest unknown chemicals, along with the high levels of THC, marketed to teens in lollipop-like forms or within brownies and other “edibles” that appear harmless.

Those who defend today’s marijuana should note there are no current scientific studies published about the effects of smoking this stronger form of marijuana. Experts like Dr. Gelbart, however, who have been on the front lines of treating teens for more than 20 years, know the dramatic addictive effect of dabs or wax.

Combine this super-potent marijuana with alcohol consumption and today’s heightened pressures, and experts see a recipe that is increasing teens’ risk for addiction, depression, anxiety, low self- esteem, poor grades and spiraling choices. These choices can lead to even more troubling incidences of STDs, teen pregnancy, DUIs or even jail time, due to car accidents or illegal use.

“Teens get confused. If you are 15, your brain is only 60% developed. Most people would say for a developing brain, nothing good is going to happen when you expose it to alcohol and drugs. The science is strong and clear. It isn’t legal for teens,” says Donnie W. Watson, PhD, program director of the Thelma McMillen Center.

“Times are different (than when parents were teens),” Dr. Gelbart adds. “The stressors and problems and social media pressure make marijuana even more dangerous. Clearly it (marijuana) is a gateway drug for using even more potent drugs.”

While teens can’t overdose on cannabis, they can—and have— landed in the emergency room when doing dabs. Dr. Gelbart and his team have treated teens and their families after ER visits. In most cases, the parents were caught by surprise and just didn’t pay attention to (or didn’t want to see) the signs and negative effects marijuana use was creating in their kids’ lives.

Just ask Jane (name changed for anonymity) whose son Thad became addicted to marijuana as a teen. She and her son both went through treatment at the Thelma McMillen Center four years ago. Jane wants other parents to know about her experience because it isn’t a “typical” one.

Jane, an educator, had talked about the risks of drugs and alcohol use with her son, a South Bay athlete and good student. Thad had been in therapy for his learning disabilities for years, and his therapist never suspected Thad had a drug or alcohol problem. Experts say this is common because teens become very good at disguising and lying about their use. By the time Jane figured it out, Thad was 17 years old and had been using regularly since his freshman year.

“My son had a therapist. He was so apologetic about missing it. He was so close to my son that just didn’t see it,” she explains. But in looking back, it was easy to see how that happened: Thad was an Eagle Scout, maintained a 3.3 GPA and was active in music and athletics. “So what’s the problem?” you might be asking. Jane noticed dramatic mood swings and extreme disobedience at home that was significantly different than before. In fact, after one particularly bad day, Jane got Thad into the car and drove for four hours in the rain, threatening to move him to Alaska, to get him to open up about what was going on. It was then he admitted to using marijuana.

Four years later, after treatment at McMillen and having the distance to reflect while in college, Thad has admitted it was much more than “just marijuana,”—that marijuana was a gateway to using alcohol and other drugs, and he had no intention of stopping. If she hadn’t forced him to go into treatment, he would have spiraled further.

“Thank God he was only 17 (when she found out), as I still had the legal rights to sign him up (for therapy and treatment at the McMillen Center). For a parent, McMillen is a lifeline,” she explains.

What Thad and Jane liked most about Thelma McMillen Center is how it educates parents, as well as teens, on addiction. From weekly parent support group meetings to individual counseling, to parent and teen meetings with counselors, the Center provides assistance for the entire family.

“The education for parents is invaluable,” Jane explains. “You can only do so much. Once kids start on this drug path, it’s a long, miserable path. Parents have to reach out and keep reaching out. You can give your heart and soul to your kids, and they can still go on this path for a variety of reasons, from learning disabilities to peer pressure.” The extensive counseling about the nature of addiction is critical, as teens and many adults just don’t understand why some people become addicts straight away and others who use never do.

For instance, Jane’s son got pressured to try marijuana and alcohol by his best friend, a popular and good student. But Thad’s genetics and learning disabilities made him more prone to addictive tendencies. While his best friend could smoke and drink on weekends and sometimes go long periods of time without using, once Thad started, it became a crutch for everyday life. Experts say this is common, especially for kids who have learning disabilities, social anxiety, depression and a genetic predisposition for addiction.

“Parents want to believe in their children. I mean I had educated him about all of this from an early age. But kids take risks. Even busy athletes can get into trouble. If the kids make this choice, you are powerless. You give them the information and you love them and support them, but once they make this choice, it’s out of your control,” Jane adds.

What is in your control, as a parent, is getting help. Jane says the best thing she ever did was enroll Thad in Thelma McMillen Center’s program.

“Once you discover the problem, never ever let them go,” Jane cautions. “Don’t stop supporting them. Put them in drug rehab or in a (outpatient) program like McMillen. Realize how powerless you are. Pot was his choice. It’s a different pot because it’s so strong, and buying it off the street, it can be laced with God knows what. The risk is like Russian roulette.”

Parents who are concerned and in need of advice can come into the Center for a free evaluation, according to Dr. Watson, who has more than 20 years of experience in the field of treating teens with addiction.

“I assess what the nature of the problem is. Parents can lay out what their concerns are, and I offer them treatment intervention alternatives at that point, including being referred elsewhere if necessary,” he explains.

By the time a parent finally takes the step (or is forced to due to a legal issue or a trip to the ER), the teen has typically been using for longer than parents realize.

“The evaluation gives parents an opportunity to tell the story, express concerns. What tends to happen normally is that teens have been using two years before parents catch on. Often parents are caught by total surprise and are in distress,” he says.

At this point, Dr. Watson has a counselor meet with the teen to get their version of the story and to garner a more accurate “use history.”

From there, next steps are determined to see if the child would be suited for the Center’s extensive six-month outpatient program that is covered by insurance. If a teen needs an in-house rehabilitation facility, Dr. Watson’s team offers suggestions and referrals to parents. As touted by Jane, the outpatient program at McMillen helps parents as much as it helps teens. Experts claim outpatient programs can provide golden opportunities for busy parents to get to know their children more deeply and be able to provide the kind of support that is successful, while navigating this stressful and emotional period.

“I never missed a weekly meeting,” says Jane, who made valuable friendships, garnered support and became closer with her son during this period. Parents need the support, according to Dr. Watson, because they go through grieving phases.

“When parents come in, usually they are in denial. They are in disbelief and ‘shock thinking’ about their kid who promised she’d never do drugs,” Dr. Watson explains. “Then they get angry at their child for ‘blowing it.’ This can be followed by bargaining (with themselves and their child) thinking, ‘Maybe it’s not as bad’ or ‘It’s a phase.’ Then depression sets in. After that, they finally get to acceptance there’s a problem and it’s time to do something about it before it gets any worse.”

No parent should go through this process alone, both doctors agree. Only treating the teen is isolating, and parents need a network and community of support, which Thelma McMillen Center offers.

“I am so grateful for Thelma McMillen Center,” says Jane. “Today Thad is successful in college and drug- and alcohol-free. I am eternally grateful.”